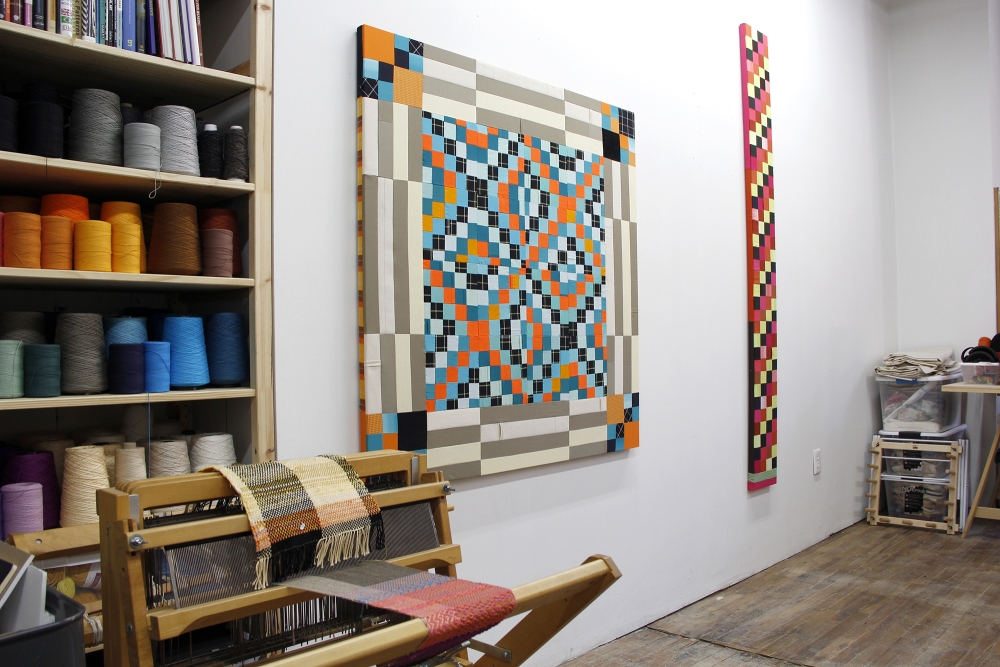 Over the course of the past two decades, Arao’s practice has steadily evolved from an early focus on drawing, followed by a shift to painting, to most recently a wholehearted embrace of textiles. The body of work presented in “Drawdown” occupies this latter space, but also reaches back to the artist’s foundations in drawing, a turn that was inspired by his current solo exhibition at the Columbus Museum in Georgia, where Arao was commissioned to curate drawings from the Museum’s permanent collection to be installed in dialogue with his own works. Fittingly, Arao’s latest textile paintings exude a heightened sense of linearity both in terms of their pictorial structures as well the works’ physicality within the gallery space, illustrated by an extreme vertical format that represents a new direction for the artist.

“Drawdown” refers to a graphic representation of a woven cloth’s pattern structure. Usually on graph paper and schematic in function, a drawdown depicts the passing of weft threads over warp threads or vice versa. This idea aptly illuminates Arao’s latest body of work, which in some sense represents a patchwork of processes that fuse drawing, painting, quilt making, and weaving. Often starting with diagrammatic sketches, the artist maps out the basic formal elements of each piece and then proceeds to machine-sew together scraps of found textiles sourced from a variety of places including the Philippines and Japan, where the artist and his husband traveled in 2019. Arao likes to think of each artwork as representations of the people and locations from which the textiles were derived and/or used, imbuing his abstract visual language with a certain human history.

The artist’s use of color is also geared toward the interpersonal and the lived world. Arao’s palettes are boldly assertive, bringing to mind a notion of color as a form of political statement. Yet his chromatic passages are subtly nuanced, beckoning the viewer to come closer and inspect the artwork as if it were perhaps a body itself. Drawing on his early experiences as a concert pianist, Arao likes to think of each sewn painting as a system of color notes that come together to produce chords, which in turn create a specific visual experience not dissimilar to listening to a piece of music. In using color that originates out in the world (found color, in this sense), and then constructing carefully articulated pictorial environments, the artist is able to create a space for painting that is both external and internal.

Arao’s interest in the optics of color is interwoven with the tactility of his chosen materials. Most recently, he has been delving into the histories of textiles in culture. The artist has become especially interested in the rich tradition of weaving, embroidery and beadwork of the Philippines, which has provided a wealth of inspiration and has brought the artist closer to his own cultural heritage. Less concerned with replicating the motifs of Filipino textile design, Arao seeks to reinterpret, translate, and otherwise frame this subject (and his personal connection to it) within the context of contemporary painting.

"My work is rooted in geometric abstraction. I’m mending this lineage of art history through the use of textiles, making work that questions pre-existing notions and expectations of what constitutes a painting, while also exploring the elastic nature of queerness and honoring my Filipino heritage. My interests in color, labor, and materiality are conceptually interwoven. Color is vital to my work. My relationship to color is not passive. It is political, it is personal, it is emotional, it is felt, and it is in my very being."

Paolo Arao is a Brooklyn-based, Filipino-American artist working with textiles. He received his BFA from Virginia Commonwealth University and attended the Skowhegan School of Painting and Sculpture. Arao has shown his work widely and has presented solo exhibitions at David B. Smith Gallery (Denver), Western Exhibitions (Chicago), and Jeff Bailey Gallery (NYC) amongst others. Residencies include: Bemis Center for Contemporary Arts, The Museum of Arts and Design (NYC), the Millay Colony, the Studios at MASS MoCA, Vermont Studio Center, Lower East Side Printshop Keyholder Residency, NARS Foundation, Wassaic Project, BRIC Workspace, Atlantic Center for the Arts and the Fire Island Artist Residency.  He is a recipient of an Artist Fellowship from The New York Foundation for the Arts. His work has been published in New American Paintings, Maake Magazine, ArtMaze, Esopus, and Dovetail. 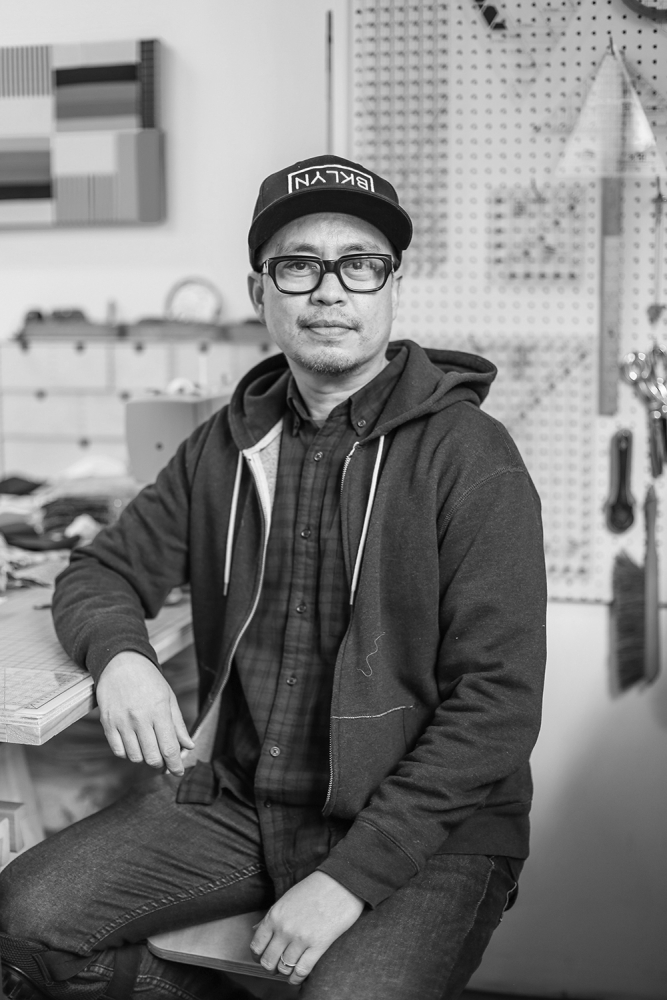